Primarily, Jesus didn’t die for you…

Primarily, Jesus didn’t die for you…

In the core of our fallen and sinful nature, we subconsciously elevate ourselves to be more than we really are. Even us Christians, and professing christians equally, we lift ourselves up to think that our cosmic creator molds His eternal will to fit our prayers and needs. 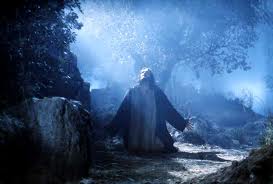 Jesus died on the cross, willingly laying down his life, because it was the will of the Father. “Saying, Father, if thou be willing, remove this cup from me: nevertheless not my will, but thine, be done.” Luke 22:42

Are we the benefactors of His death, indisputably! Was His love for us a motivating factor for His sacrifice, unequivocally! Was our salvation through His death on the cross one of the reasons God sent Him to the cross, absolutely! (Although still, it was not God’s primary reason for sending His Son to die on the cross either.)

My biblical exegesis is not to take away from these things, nor to diminish the work of Christ at Golgotha, rather to exalt all the more His work on Calvary. His purpose, the reason for Jesus’ incarnate birth, the very act of God’s condescension was to demonstrate His holiness and to fulfill His sole will, unto the death of His only Son.

“And being found in appearance as a man, he humbled himself by becoming obedient to death— even death on a cross!” Philippians 2:8

On the surface, and to the casual reader, the words herein blasphemes the average church goer’s religion. Some, maybe such as you, will take offense to all that I’ve written here. Still others, are already offended that a sinner such as I would even be posting on Christian topics. Nevertheless, I am confident that still others, those who feed on the meat of scripture, will as with second nature, be in agreement.

Liken to the writer of Hebrews, (which parenthetically, I believe is Apollos), deliberately he does not minimize the scripture, the angels, nor the prophets in his effort to exalt the Christ. He emboldens the significance of each, hitherto claims the Christ is above them all. There is no need to deduct from the former to realize the preeminence of the latter. Hence, I have undertaken the task to do likewise… obedience is greater than sacrifice.

“For those whom He foreknew, He also predestined to become conformed to the image of His [obedient] Son, so that He would be the firstborn among many brethren” – Romans 8:29 (parentheses added for emphasis)

Despite all our sin, our rebellious habits, futile intentions, immature behaviors, and disheartened religious acts; He loves us and only wants our hearts. He must be our first love, He left no other option.

It was the custom of the Romans to use gypsum lettering on rough a board affixed to a cross to proclaim the reason why a person was being executed. Latin was the official language of the Roman Empire, Greek was the international language of culture, and Hebrew was the religious language of the Jews. A likely scenario is that the Roman governor, Pilate, dictated the title in Latin and the centurion in charge of the execution implemented the declaration and its translation into the other languages. The words ‘King of the Jews’ were a public sneer at the Jews by Pilate, and this was compounded by his additional taunt that their ‘king’ came from Nazareth.

Because John is the only Gospel writer who mentions Pilate or Nazareth, or who refers to the inscription as a ‘title’, it is abundantly evident that John is quoting the Latin which read: IESUS NAZARENVS REX IVDAEORVM. (Latin used ‘I’ and ‘V’ where English uses ‘J’ and ‘U’.) That this is the Latin is further confirmed by the fact that the Early Church adopted as a symbol the Latin letters ‘INRI’, which are the first letters of this specific inscription, and this symbol, appears in many early paintings of the crucifixion.
Luke was a highly educated man and he addressed his Gospel to a Greek nobleman. It is therefore reasonable to presume that Luke gives us the Greek inscription: OUTOS ESTIN O BASILEUS TWN IOUDAIWN. Matthew wrote for the Jews and used many quotations from the Old Testament to show that Jesus was the fulfillment of Old Testament prophecies concerning the Messiah. It is therefore most likely that Matthew quotes the Hebrew inscription. This leaves Mark, whose Gospel is shorter than the other three, and who gives us a somewhat abbreviated account of the life of Jesus. True to his style, Mark abbreviates the inscription to the words common to the three languages used, namely ‘THE KING OF THE JEWS’.